Hi, Friends welcome to the Mirchitech blog. Today I want to share something special with you, and it is Moto E4, E4 Plus Price and Specifications leaked. Motorola marked a major comeback in the Indian smartphone industry with the launch of Moto G, Moto X and the Moto E smartphone back in 2014. The most affordable of the lot, the Moto E met high demand when it was released in the country. 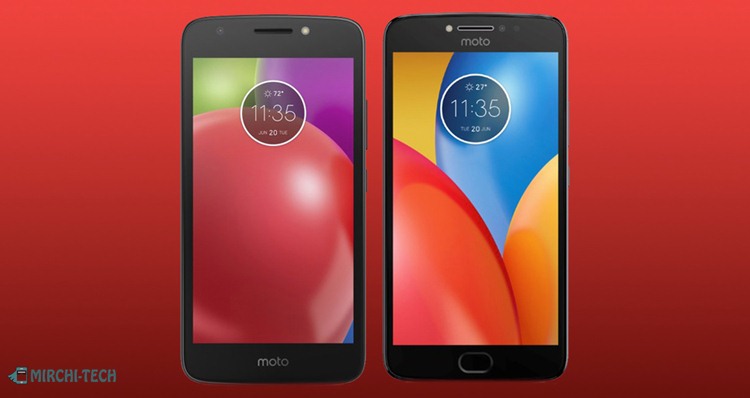 According to the German website Winfuture.de, the new Moto E4 is tipped to be the successor of the last year’s Moto E3. The smartphone is said to feature a 5-inch HD (720×1280 pixels) LCD display and be powered by a 1.3GHz MediaTek MT6737M quad-core processor paired with 2GB of RAM. The Moto E4 will come with 16GB of storage (further expandable via a microSD card slot).

The smartphone will run on the latest Android 7.1.1 Nougat. In terms of optics, the Moto E4 will sports an 8-megapixel rear sensor and a 5-megapixel front-facing camera. The new Moto E4 is said to carry a 2800mAh battery and will have 4G LTE, Bluetooth v4.2, NFC (optional), Wi-Fi 802.11n, and GPS in its connectivity option. 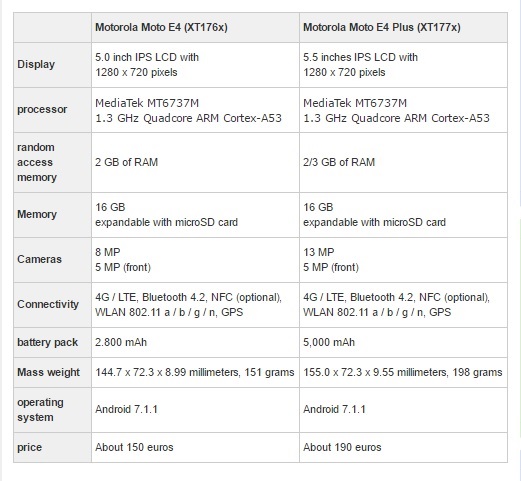 The bigger variant, Moto E4 Plus meanwhile, is said to pack a massive 5000mAh battery. The smartphone will feature a bigger screen size of 5.5-inch HD IPS (720×1280 pixels) display. The rear camera will accommodate a 13-megapixel lens.

The device will run Android 7.1.1 Nougat. It will be powered by the same MediaTek chipset like the one in the Moto E4, as per the report. The phone will have 2GB/3GB of RAM and 16GB storage (expandable with microSD card).

The  E4 will ditch the Home button suggesting that the fingerprint sensor might be placed at the back.

Hello, friends, I am jimmy, this is the information about Moto E4, E4 Plus Price and Specifications leak and enjoy it. Share this article on social media because sharing is caring. And if you have any question then send a message to us. Take care friends. Keep visiting and keep reading.